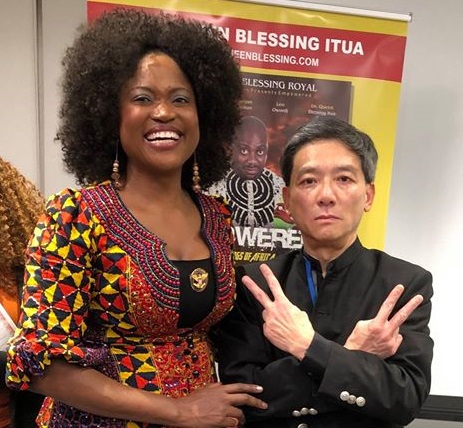 Our Collective global alliance which I created with co-founders Teresa Nacli and Maggie Law is proud to announce that our United Nations (UN) member Non-Governmental Organization (NGO) Global Empowerment Movement (GEM) founded by Dr. Queen Blessing Itua, will be hosting a UN summit on 17th January within the UN headquarters in New York. Co-hosting this UN conference along with Our Collective member organizations will be Wall Street News Agency, headed by Yuxiang Min who will give the opening remarks, and World Council of Peoples for the United Nations, headed by Sherrill Kazan who will be acting Moderator for the panelists. Expert speakers will be Mongkol Thitithamasak, UN IT manager, who will cover the forum on Technology aspects of AI and Blockchain technologies. For the Commercial forum section, co-founder of Yezcoin, Vernon Gibbs will be delivering his 20 minutes presentation. I along with Queen will represent Our Collective speakers on perhaps the most important topic of this UN summit on the forum of Humanity.

Artificial Intelligence (AI) is a computerized machine that has in principle self-learning and problem-solving capabilities independent of human operators. The hardware of such machines are currently manufactured by human hands, and the initial operating software are entered by human programmers. In the future, it is realistic to expect that machines will give birth to other machines without the interactions of human creators; most modern automobiles are already predominantly built by robots on mass production lines. Although the concepts of robots and androids (robots that resemble humans) have been in popular culture for over a century, the serious academic research into AI is only a few decades in maturity. Recent modern advancements in robotics and supercomputers have provided the platforms from which true AI cognitive machines are beginning to emerge from the realm of science fiction into scientific reality. Blockchain is a virtual ledger of informational data consisting of blocks of records linked securely in a coded cryptographic chain. It was initially developed in 2008 in the creation of a digital cryptocurrency named Bitcoin. In principle, a blockchain is managed by an open distributed collective peer-to-peer network that verifies each block of data, in the case of cryptocurrency these verification would be on financial transactions between various parties. Once a block of data is verified by majority consensus of the network, it is recorded and can no longer be altered, and the chain grows into the next linked block. These original blockchains are decentralized open network systems, which is one of the main reason for the popularity of Bitcoin, as it removes the creation and supervisory control of money away from centralized financial institutes and governments, allowing for secured private trades with no restrictive borders or scrutiny.

Blockchain has evolved into much more than just digital money; its fundamental technological building blocks can be utilized in any applications that processes and stores data, which in our modern computer age basically means it can be a valuable tool in almost everything such as healthcare management, transportation logistics, financial exchange platforms, even combating poverty and climate change. AI machines will require the acquisition and processing of vast amounts of input data, from which the main central processing units (CPU) will analyze and employ actions based on its evolving programs. The nature of an evolving blockchain is ideally suited to incorporation into AI as an artificial neural network that grows along with the intelligence of the machine.

Our Collective collaborative partnership with Yezcoin, provides access to the most advanced of technologies and technical resources to develop an unique holistic operating model ideally suited to providing a modern global one-shop application platform.

This major UN summit will be focused on three dominant areas of critical importance, essentially relating to humanity’s past, present and future developments, applications and interactions with advanced AI and blockchain technologies.

For the humanity debate, focus will be on how an advanced AI-Blockchain Matrix can be utilized to combat both global poverty and climate change as part of the UN Sustainable Development Goals (SDG) initiatives.